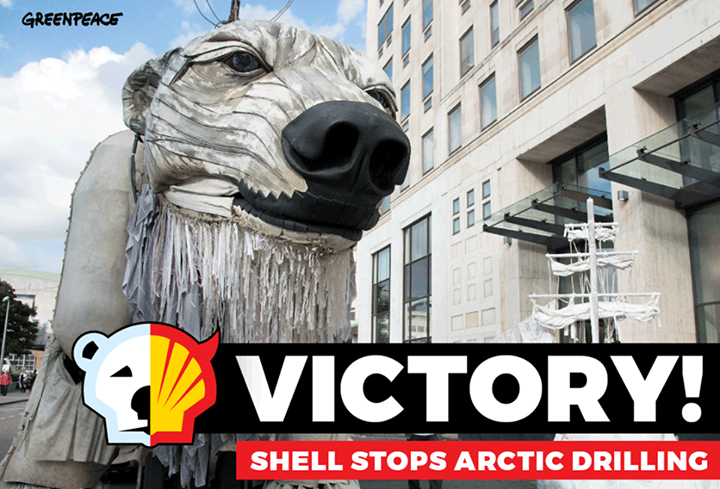 Greenpeace +7 million persuade Shell to give up on Arctic Drilling

Heart-stopping moment: Shell just announced they will stop drilling for oil in the Arctic!

The Guardian reports today that on top of rising costs, “Shell has privately made clear it is taken aback by the public protests against the drilling which are threatening to seriously damage its reputation.”

Three long years of campaigning, one incredible summer of action, and 7 million of us around the world in a rising global movement for the Arctic – just, wow!

Or if you don’t use Facebook, forward this email to some friends to show them this is what people power can do!

Shell have said they have abandoned drilling in the Arctic for the “forseeable future”. And the Financial Times reports today “Exit, pursued by a polar bear… A decade-long escapade on ice is over”.

It’s the climax to an amazing three years. Around the world, millions have signed the petition, thousands sent emails to Shell and called on President Obama to intervene. Together, we got LEGO to end their toy deal with Shell, sending a powerful message to the company that Arctic drilling doesn’t win friends.

We closed Shell petrol stations across the world. At sea, we pursued and climbed on board one of Shell’s Arctic rigs to shine a light on their drilling plans. In the USA, we delayed them by hanging activists from a bridge – and garnered huge mainstream media coverage in the process. And here in the UK, we’ve been outside Shell’s London HQ for two months, with musical performances and the three-tonne polar bear Aurora.

Every petition signature, every donation, every tweet or Facebook post spreading the word, every activist putting her body in the way of an oil rig or ship has added up to this victory.