Home and business owners affected by the recent heavy flooding can, since April 1st 2014, apply for a government grant of up to £5,000 with which to purchase protective measures against future floods. A wide range of flood resilience systems can be applied for, including sump pumps, timber replacement and damp proof courses.

Since December last year, more than 10,000 UK homes and businesses have suffered damage as a result of heavy rain and flooding.

The grant scheme has been implemented as part of the government’s pledge that money to help those affected would be “no object” and that “decisive action” had to be taken.

As well as the homeowner grant scheme, the government also announced council tax rebates, a 100% business-rate relief for a period of three months and extra help for farmers hit by the bad weather.

The Resilience & Resistance Grant is on offer to any homeowner in England whose property was (or will become) affected by heavy rain and flooding between December 1st 2013 and May 31st 2014.

The grants may be used to waterproof walls and doors or simply to raise appliances and services.

Homeowners can even use part of the grant to engage the services of a competent, qualified professional contractor to create a bespoke restoration plan. 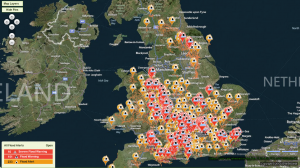