GBE Classification About
About:

When there are may topics within a subject like construction or environmental construction its convenient to break them down into smaller packages and to label them and then organise them into some logical order.

Classification is one name for this process

Over the decades many different parties looking at information from different perspectives have classified in different ways.

More recently attempts have been made to bring these classification systems together.

Prompted by the NEDO report on Quality of Building Sites (1976?) and a desire to improve coordination and reduce Quality Related Events (QRE) Common Arrangement of Work Sections CAWS 1987 was an attempt to bring Quantity Surveyors and Architects closer together to merge Bill of Quantities (BofQs) classification with Specification classification to produce Common Arrangement of Work Sections which could be used in both BofQs and specifications and enable simplified cross referencing. CAWS was even adopted in some information libraries.

Uniclass 1997 was the next attempt to merge systems and fill gaps; it achieved a concatenation of existing classification systems into a single volume, but also changed some of the existing codes in the process. This left Architects having to decide whether to drop CI/SfB 1976-1991 or follow BS 1192 classification for drawing numbering and CAD layering.

Most recently driven by UK Government’s desire to adopt BIM Building Information Modelling to improve efficiency by improved coordination between all parties of the construction industry is Uniclass (2012 and still evolving) which is being developed to work though all stages of the evolution of a building or other entity, to ensure continuity and avoid battens being dropped at any stage of the process from commissioning to end of life and even second life.

BIM will also extend into the world of facilities management and Industry Foundation Classes (IFC) and Construction Operation Building information exchange (COBie) have developed to enable this transition.

History of classification on ICIS

SfB started it all off 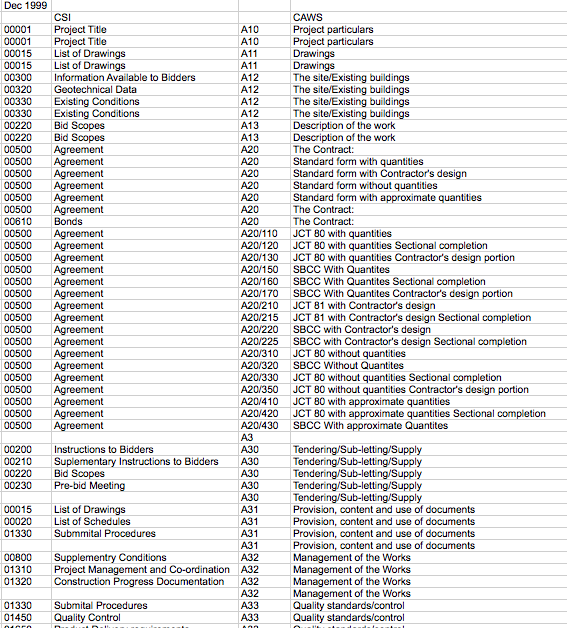